Are you working hard at the gym and eating healthy but not seeing the muscle growth you want? If you’re comparing your performance to fellow gym-goers, it could be because they’re supplementing with creatine.

Creatine has been proven in countless studies to increase athletic endurance and make your muscles seemly grow faster due to water retention. We won’t go so far as to call it a miracle supplement, but it can feel that way for some.

If you’re ready to hop aboard the creatine train, it’s essential to do your due diligence, as several forms of creatine exist on the market. So, we’ll explore the differences between creatine monohydrate vs HCL, which are the two most popular creatine varieties.

What Is Creatine Monohydrate?

Creatine monohydrate is a compound that contains a single molecule of water. Although the word “creatine” is new to many people, it’s a naturally occurring amino acid produced by the liver, pancreas, and kidneys.

You can also get creatine by eating red meat and seafood. Nevertheless, you can experience improved athletic performance and cognitive health benefits by supplementing with synthetic creatine.

Creatine monohydrate is the most popular and most widely studied type of creatine. It has no side effects, and studies show it can help athletes and casual exercisers alike manage heavier training loads.

What Is Creatine HCL?

In scientific terms, creatine hydrochloride (HCL) is a human-made compound that combines a creatine molecule with a hydrochloric acid group.

Whereas Michel Eugene Chevreul discovered naturally occurring creatine in 1832, it wasn’t until 2003 that scientists accidentally stumbled upon creatine HCL.

As a result, scientists have performed fewer studies on creatine HCL than on monohydrate. Nevertheless, it’s generally believed that HCL is the best type of creatine for people who want to avoid the bloating effects that creatine monohydrate can sometimes cause.

Differences Between Creatine Monohydrate and HCL

Aside from the chemical composition difference between creatine HCL vs. monohydrate, below are some areas where these creatine types differ the most.

Creatine monohydrate has the following qualities:

Creatine HCL has the following qualities:

A loading cycle refers to increasing the amount of creatine monohydrate you take by four times or more for one week or less. That helps the creatine get into your muscles faster.

However, this loading cycle doesn’t appear necessary for creatine HCL, given that it’s more water-absorbent and therefore arrives in your muscles more efficiently.

Similarities Between Creatine Monohydrate and HCL

Despite their differences, creatine monohydrate and HCL appear to offer similar bottom lines for people looking to improve their fitness and muscle tone.

Furthermore, although creatine HCL is more water-absorbent, that’s not to say that creatine monohydrate will leave you with a gritty drink. Creatine monohydrate dissolves in water, but it falls out of the solution fast. So, check the bottom of your glass to ensure you don’t leave any behind.

Which Creatine Is Safer?

If one of your primary purposes for comparing creatine monohydrate vs HCL is health reasons, you’ll be happy to know that both appear safe to use. However, since scientists have run more studies on creatine monohydrate, many feel more comfortable calling this the safest creatine.

For example, a study published in the Journal of International Society of Sports Nutrition indicated that there’s “no compelling scientific evidence” suggesting that consuming creatine monohydrate in the short or long term will have negative health consequences for healthy individuals.

The study wasn’t conservative on the amount of creatine monohydrate that participants used, either. They said people could consume as much as 30 grams of creatine per day. Given that the higher dosage recommendation for creatine during non-loading periods is around five grams per day, you should be able to feel at ease consuming creatine monohydrate.

Other studies show that even with adolescent athletes, a population that researchers formerly avoided, creatine supplementation is “well-tolerated” and has “no reported adverse events.”

So, when it comes down to it, although scientists have done more research on the safety of creatine monohydrate, there’s no evidence to date that suggests creatine of any type, including HCL, is dangerous to the average individual.

The Best Way To Supplement Creatine

As a new creatine user, the best supplement method depends on whether you choose creatine monohydrate or HCL. We recommend following the instructions on your creatine supplement or consulting with your doctor or trainer for exact dosage advice.

However, generally speaking, it’s common to consume ¼ teaspoon of creatine HCL and five grams of creatine monohydrate per day. You can get away with taking less HCL because it’s more soluble, allowing the body to absorb it more easily.

That said, you can do a creatine monohydrate loading phase to help increase the creatine build-up in your muscles. That said, this strategy simply boosts your muscles’ creatine levels faster. You’ll eventually arrive at this state by skipping the loading phase and taking a smaller daily dose of creatine.

Because creatine HCL is so soluble, there’s no need to perform a loading phase with it.

Should You Take Creatine With Food?

Creatine monohydrate and HCL come in a powder form that you’ll mix with liquid. Some people insist that you should take creatine with carbohydrates, as a 1996 study suggested that it improved skeletal muscle creatine accumulation.

Nevertheless, other studies, such as a 2016 study on consuming carbohydrates or cinnamon extract with creatine, indicate no additional benefits.

The bottom line is that whether you choose to take creatine monohydrate or HCL with or without food, you’ll still receive this supplement’s endurance, muscle-building, and recovery benefits.

Although creatine monohydrate and HCL are the most popular creatine varieties, there are others you can take instead.

Some of the other forms of creatine include:

Each of these creatine varieties has its supposed benefits. For example, liquid creatine can come in any creatine variety and the idea is that it’s supposed to be more convenient, already being in a drink you can pull out of your fridge. However, a study on cyclists showed that powder creatine has more performance-enhancing effects.

In contrast, the malic acid in creatine malate may help you improve your stamina, whereas creatine citrate offers even better water absorption than HCL, though it may not allow the body to absorb it any better.

However buffered creatine may help with absorption since it helps prevent how much creatine breaks down in the stomach. On the other hand, creatine ethyl ester may absorb better in fat, but it could ultimately damage your kidneys.

Finally, since it reduces water retention, creatine magnesium chelate could be a good fit for people concerned about the bloating that creatine monohydrate can sometimes cause. However, creatine HCL and all the other creatines on this list, researchers haven’t studied them as well as creatine monohydrate.

What Creatine I Use and Recommend

This is the one that use, I just mix it into my shakes or pre workouts. You need your own scoop and you need to measure out the amount you want, but it’s cheap and high quality. 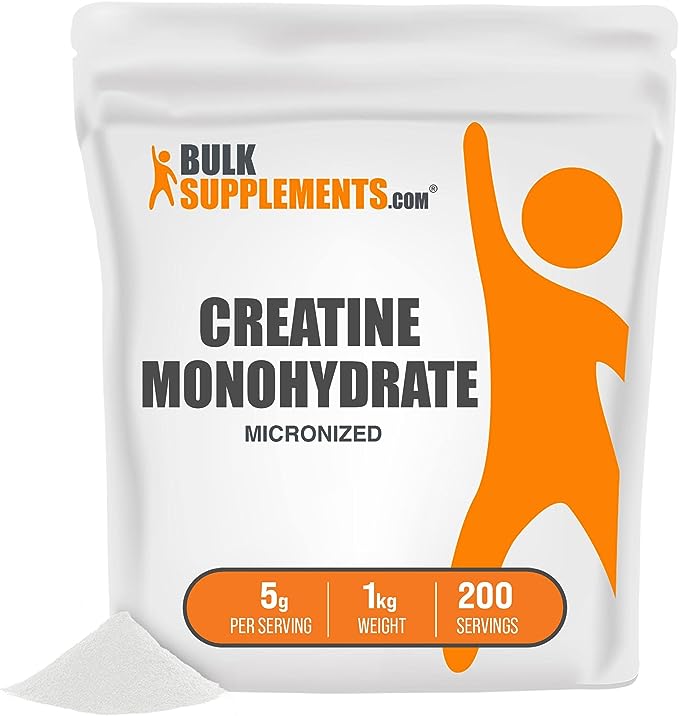 Just Creatine Monohydrate Powder. Add it to your favorite pre-workout.

We’ve answered some common questions below to help grasp the differences between creatine monohydrate and HCL.

Which creatine is best for muscle growth?

All creatine should support muscle growth, given that it helps increase endurance, meaning you can train for longer and with heavier weights. Creatine also has water retention properties, particularly the monohydrate variety, which will make your muscles appear larger.

How much creatine HCL is equal to monohydrate?

Creatine HCL absorbs better in the body, so you typically only need ¼ teaspoon of it to achieve the same results as 3 – 5 grams of creatine monohydrate.

Why shouldn’t you take creatine HCL or monohydrate?

You should speak with your doctor before taking creatine HCL or monohydrate if you have kidney or liver issues. A small percentage of the population has reported kidney stones and liver damage issues when taking creatine.

How well has Creatine been studied? Is it well researched?

There are over 700 studies documenting the effects of creatine monohydrate. Below are some excerpts of findings from top studies.

Are You Ready To Increase Your Weightlifting Performance?

Although there are notable differences when comparing creatine monohydrate vs creatine HCL, you’ll be hard-pressed to find a scientist discouraging either of these supplements as a way to improve athletic performance and increase muscle mass.

So, regardless of the type of creatine you end up choosing, you can expect to see results as long as you stick with a workout plan and healthy eating regimen.

Copyright 2011-2022. Natural 20 is owned by Third Day Beauty LLC, a California company. Our website services, content, and products are for informational purposes only. Natural 20 does not provide medical advice, diagnosis, or treatment.

Natural 20 is a participant in the Amazon Services LLC Associates Program, an affiliate advertising program designed to provide a way for websites to earn advertising revenues by advertising and linking to Amazon.com.